The Role of Google+ within the G-Universe

30 Apr The Role of Google+ within the G-Universe

Posted at 19:58h in Social Media by Pooja Mehra

While time spent and activity on Google+ is dropping, these stats may not be as meaningful as they seem.

It is less concerned about people posting status updates every five minutes than they are about making sure people are ‘signed in’ as they move across Google properties. As users register for Google+, they are bringing together their various profiles and user information from Gmail, YouTube, Picasa and other Google properties.

Then, by staying signed in (as they hop from one property to another), users are providing the basics of what Google needs to target search and ads. Any added commenting, +1s and participation are just ‘icing on the cake’.

Google+ and its Users 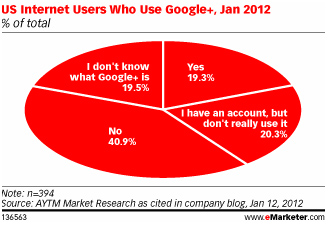 Google+ has seen million of users sign up for the site since its July 2011 launch. However, engagement and participation aren’t up to speed with other social networks, and that has become a major obstacle for turning Google+ into a relevant social network. Even though enough consumers are signing up for Google+, many admit to not using it actively. 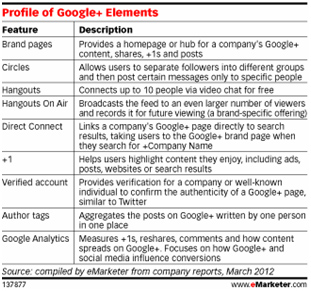 Some detractors say that users and marketers do not want another social network to add to their plates; while others tout the consumers online habits are different now compared to the early years of FB and Twitter. Users are more comfortable with social media and more open to sharing their lives via networks online than when they were when FB and Twitter were introduced.

In March 2012, eMarketer collected information about the top featured that brands can use on Google+, including Circles, Hangouts and Direct Connect.

Despite the naysayers, the truth remains that there are consumers actively using Google+. Not as many as on FB and Twitter, but tech-savvy and social media-inclined users have taken to the site because it allows for longer conversations and has a visual layout. This audience, for some tech companies, is seen as a positive element of Google+.

Google+ and its Marketers

Just as the public’s participation in Google+ ebbs and glows, marketers interest in Google+ has been fluctuating since its launch. After the inclusion of Brand pages, scores of companies such as Macy’s, H&M, Intel and Samsung have started pages and now have thousands of fans following them, as well as commenting on, sharing and +1ing their content. Google has since announced an update to Google Analytics that focuses on measuring the value and impact of social media.

However, not all marketers are keen to jump into Google+. It’s hard to justify putting in a ton of resources into it today until the benefits are clear,noted 360i’s Berkowitz.

Despite the challenges related to marketing on Google+, Google is putting intense effort into making Google+ work, and marketers must determine the best way for their companies to participate. Some may see it as a place to interact with tech-savvy influencers. Others may use Google+ as they currently use Face and Twitter, to connect with consumers. And even more may just join Google+ for search marketing purposes.

It’s easy to look at Google+ and say, Oh, (the users spend only) 3 minutes a month. It’s failed. But Google’s playing a long game here. They’re not just trying to pull the rug out from under Facebook, they’re going to unify the user experience and make it easier to interact with all the sites. It’s this value proposition, with the biggest ‘data’ that Google can provide is what will eventually make both its users and advertisers hooked on to it.