Posted at 08:23h in Social Media by Pooja Mehra

The next time you plan to plaster the online world RED with advertising or budget to spend the next thousand dollars on promotions, take a batted look, for the next-gen social networks now seem to have cemented their place in advertising. More marketers than ever today believe their brands should be engaging with consumers on social networks and advertising is an increasingly successful tool for doing so.

According to the latest eMarketer estimates, social networks will reach a whopping $8.04 billion in ad revenues worldwide next year, up 45% from 2011. As Internet usage continues to grow in other parts of the world beyond US, and social networks continue to proliferate, by 2013 it is set to come close to a 10 billion mark.

This trend evidently shows ad budgets shifting more heavily toward social networks with the centre court being dominated by Facebook. Let’s talk about this as $7 out of every $10 flowing to social networks worldwide is likely to go to Facebook in 2011, and it is expected to draw 5.8 billion in worldwide ad revenues in 2012 (surpassing Yahoo! this year to become the leader in US display ad revenues). 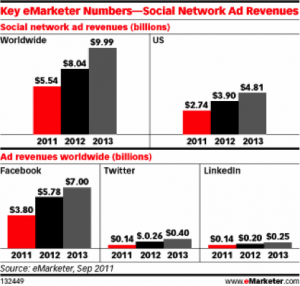 While it’s too early to predict how big Google+ will get, it will not need hundreds of millions of users to be attractive to marketers.

Further, branded integrations and video ads in social gaming will increase, even as lead generation offers will remain an integral (if controversial) part of the revenue mix. The social game ad market will reach $641 million worldwide in 2013.

It is becoming pre-eminent for nearly every business to market via social networks. Marketers recognize the importance of these network destinations where consumers are spending more and more time. In fact, there have been many claims that Social Network Advertising will revolutionize the online advertising market. Most famously, founder of Facebook, Mark Zuckerberg announced that for the last hundred years media has been pushed out to people, but now marketers are going to be a part of the conversation. What’s more, 80% of US companies with 100+ employees are also using social media tools for marketing this year.

As more companies strive to build out their marketing presence in such social networks, they are increasing their focus on spending ad dollars there. ‘Paid’ Social Media is said to play either a critical, major or at least a minor role in their marketing metrics – as social media ad spending eats more noticeably into available funds.

Although the funding sources are still a mix, coming from search, display and even traditional advertising, some companies are creating altogether new budget lines just for social media advertising. These figures include paid advertising appearing within social network sites, social network games and social network applications.

The existing opportunities in social networking advertising are diversely different from the early efforts and thankfully perform better, but perhaps the biggest change, the real evolution is the way we understand messaging in this environment and the expectations we have for this channel.