Roughly 117 Million Searches are made for ‘Google’ in Bing

Even though Google controls 65% of the search market, there are still an alarming number of users who use Bing on a daily basis to get to Google.

A major SEO firm conducted a study on user behaviour to help define the impact of Page 1 search engine rankings. The study was over the course of six months and examined 324 total (stable) keywords in both the search engines.

EXACT CTR = (# of visits) / (# of searches)
The Observed CTR curve for organic U.S. results for positions #1-10 in Google SERPs and Bing SERPS were as follows – 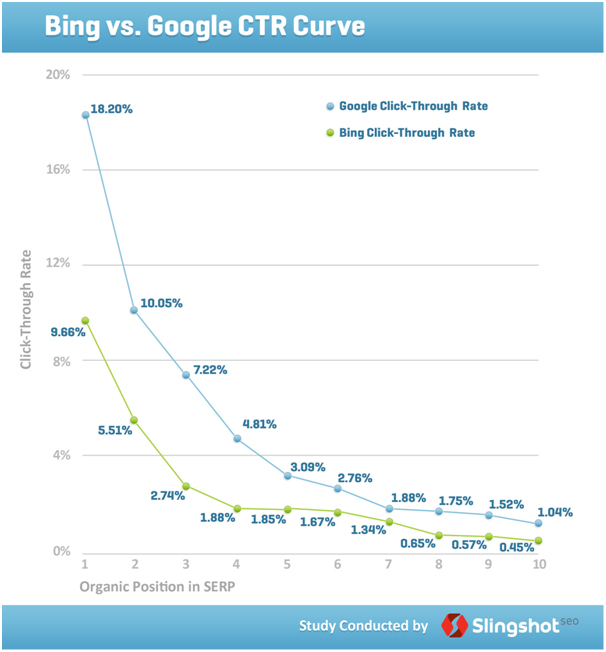 If so few users are clicking on Bing organic results after a search, where are they going? Possibilities include ‘related searches’ on the sidebar, re-queries, Page 2, one of the tabs at the top, a paid result, or the images, videos, news, shopping, local listings results within the SERP. The lower click-through rates could be attributed to Bing users abandoning their results and heading to Google. Perhaps users are trying their searches and then re-querying in Google.

Henceforth — Specifically optimizing for Bing is still important, especially since the demographic of users is different. Hit-wise the study showed that 58% of Bing users are female, whereas only 45% of Google users are female. It also found that most Bing users are age of 35 or older. This is incredibly valuable information for marketers because it affects the target audience. If you have a product geared towards females or an older group, Bing may be more valuable to you.

[i] Source: A study from Slingshot SEO that examined the CTR for positions 1 through 10 on Google.

The Internet Battlefield: Why should your Business care about ranking in Google?
Share
Print page
Why Web Analytics and Segmentation are Important to track Results