Is Social SEO the next big shift in SEO?

16 May Is Social SEO the next big shift in SEO?

Posted at 09:52h in SEO, Social Media by Anja Stephan

On which date in the history was hard work declared as the key to success?, was the question put across to bully a fresher on his first day at college. To this the boy smugly replied, If indeed there was a date to that and I’d have told it to you, you wouldn’t bat an eye before labeling me a geek and asked me another question. But since no such date exists, I’d say, it was the same year when first introductions with seniors came to be known as- ragging. The moment he said it, he knew he had earned the acceptance of his bullies, it was evident on their faces.

As an inference- if you can generate certain likeability for yourself, you only stand to benefit.

Which is exactly what many SEO Experts & online marketers today are lacking at. So, for those who feel marketing online has become a tough nut from some time, it’s time to go back to where we started from.

All efforts to Stay Authentic

Yes, digital marketing per se remains the same old recipe- a bit of SEO by a SEO Company, interspersed with social media marketing, topped with some reviews and the likes. You know the drill.

But, to deal with the current situation you must aim at attaining better brand awareness for your product, build a genuine fan base and get comments by real people having real social media profiles.

With so many fresh initiatives being taken, the digital marketing domain is all set for massive changes in the times to come; like a civilization that rises again from the rubble. And only those with authentic presence would be the last ones standing. To cut the long story short we’re talking about increased engagement with platforms such as Twitter, Facebook, Google+, YouTube et al.

Social SEO is here to stay – it’s a given thing.

Google has now made its prerogative to display the right results for all search queries that go into it. That’s where Social signals come into play. Simply put, Social Signals corresponds to the no. of times the links to your site/content finds a mention on social media sites. Make no mistakes, they do affect your search ranks. As Google feels that if your content is shared repeatedly on Social media, it’s of worth.

This new wave that comprises of sharing content, comments and liking on social media has effectively sidelined the previous old ways. 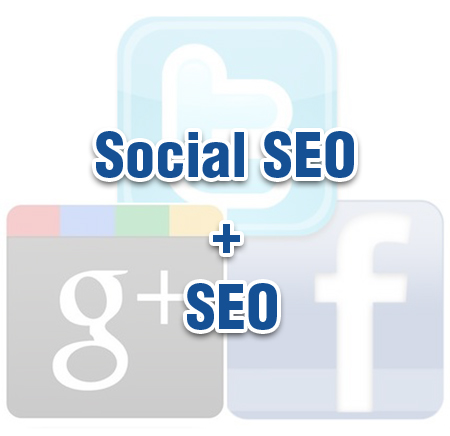 Social Media as well as SEO, as long as they exist will have separate campaigns and would certainly have separate aims. That said, certain mutual objectives do coincide amongst them and there are ways in which one can benefit by both. Due to an ever increasing significance of social signals for succeeding in SEO, both of them can’t be and must not be treated separately.

Therefore, one must be a winner on the Social media (with increased number of Facebook likes and Twitter followers) while having a strong SEO strategy in place.

You see it exactly does to you what good work + good reputation can do to you.

A few years back

In the winter of 2010, Matt Cutts was asked a question by someone with regards to an article by Danny Sullivan (of Search Engine Land) about the importance of Social signals. Matt was directly asked whether he could confirm whether Google uses Twitter and Facebook links as a ranking signal? The answer was an emphatic ‘YES’.

He further elaborated that although Google does take your popularity on social sites into account, it also tries to examine the authority of its creators on Facebook or Twitter (So, overindulging in it would be a bad idea too).

That your Social signals cushions your SEO is correct, but the fact remains that right SEO is irreplaceable. Social signals are just add-ons, however substantial add-on nevertheless.

While they do affect the rankings, it isn’t known to what extent they do it. But one thing is clear, they aren’t as important as good backlinks.

Similarly, web citations through check-ins have also become an integral part of search engine algorithms. So, using something like Google places can get you a reasonable authority, for the sheer reason that it establishes authenticity.

Writing Reviews has proved to be yet another beneficial phenomenon and so has having related videos on YouTube. As a matter of fact one must never neglect the importance of YouTube and G+ since they both obey Google.

For sure one mustn’t leave out the SEO – Search Engine Optimization, it is indeed the backbone. But if one can get it stronger through Social Signals, then nothing like it. That way, no one can stop you from earning better authority.