Posted at 07:39h in Social Media by Harman Bajwa

In its early phase following the announcement of Google+ pages, brands have been moving quickly to garner presence on its Google+ pages. Google+ pages, offering its users the ability to manage their social media presence in the Google+ network, is scrutinized as a move mimicked pro the already long-standing functionality offered by Facebook. No wonder then it’s the combat between the ‘+1’s’ and the ‘Like’s’.

A recent report released earlier this week by BrightEdge shows 61% of the top 100 brands to have established their presence on Google+ pages. Conversely, 93% of the same top 100 brands have adopted Facebook Pages. Google is the only company with the largest fan contingent on Google+, having attracted more than 65,000 fans (surprise! surprise!)

While the reflection is on whether it will be worth investing time and money in yet another social media tool and which one should be leveraged upon; a major deliberation for a brand is whether to be present on one or both. But the trademark that it is, Google+ may turn into a major new social platform where brands want to quickly establish themselves on. 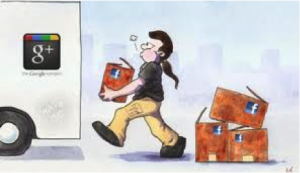 For instance, Google+ has the ability to target specific audience, especially through creation of circles. Britney Spears in a recent post asked her fans to name their country of origin. Following which, she put them in different geographical circles. Now she can post country specific news, her direct target audience. Yet, the plus brand pages are still very post based; and it lacks the interactivity required for interactive audience engagement. On the other hand, Facebook scores bounty over audience engagement.

Whilst Facebook was lauded for being ‘cleaner’ than Myspace, it increasingly has become cluttered and invites a lot of spam; Google+ on the other hand beholds a much cleaner look. Google also offers an opportunity for its brands to speak directly to their audience without being interrupted by umpteen status updates coming from an aggrieved ex-co-worker or scores of photos featuring ragtag Sens pounding the struggling Vancouver Canucks.

Google+ has a ‘Hangouts’ feature which allows live audio and video chats and the opportunity to provide exclusive content to consumers, a feature missing in Facebook and Twitter.
Furthermore, G+ is continuously unifying its offerings and may soon be integrated with its other Google Services (including Places, Maps, You Tube as well as and Web and Image Search). This means more visibility and could impact the potential future organic search value of participating in Google+.